Those Irish Eyes just keep coming back to haunt you. First you were drawn in by the initial Irish Eyes 5 reel, then Irish Eyes 2, now the Galway girl has returned to seduce you once more in the scratch card addition of the romantic Irish favourite.

Since their inception in 1999, NextGen has continued to push the envelope. At the forefront of the gaming industry, they are the proud pioneers of platform-independent content delivery. After two successful decades, they continue to create games to be enjoyed by the masses and without boundaries.

Responsible for the hit slot, Irish Eyes, NextGen have adapted the same Irish theme and created an interesting scratch card. Everyone loves scratch cards. The anticipation of revealing that all-important matching symbol... It just never gets old. There are many inventive online scratch cards, and Irish Eyes 2 has to be one of the best.

The back ground is a cheerful image of the open countryside, long grass, trees beneath a sunny sky and, of course, a huge rainbow. The play grid is divided into nine squares making a picture of a glamorous red head with fabulous green Irish eyes. The symbols hidden beneath the image are, a pot of gold coins, the red head, Irish Eyes 2 logo, an Irish Claddagh ring, a Celtic symbol, A green Top Hat (bet some leprechaun looking for that) a four leaf clover and a pipe (he's probably lookin' for that too!) 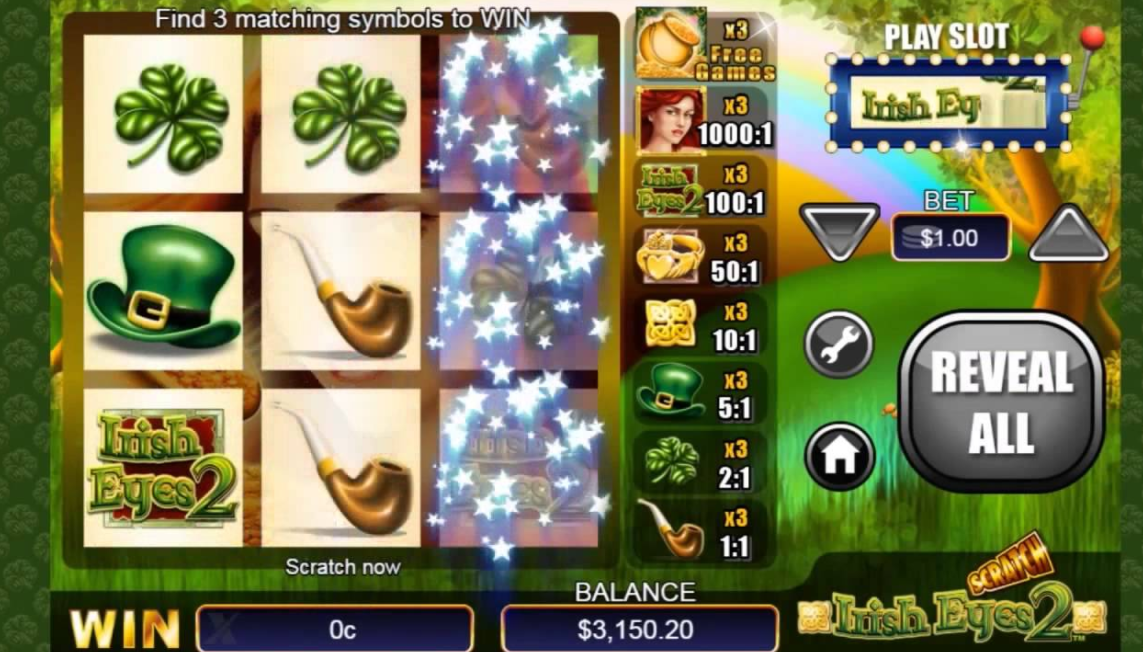 It is all relatively simple, you set your stake using the arrow heads either side of the bet box these range from 0.20 to 200. You can choose to clear each square individually or choose reveal all at once. Put reveal all on auto and sit back and watch the luck burst everywhere! And burst it does. This is a lively, all singing, all dancing graphical treat with star bursts, popping symbols and jolly musical bursts on wins and events. Furthermore it's more than just a ‘match em up' scratch. Reveal three of the pots of gold symbol and you will win three free games/reveals and any wins are doubled! Find three of the bonny red head and you get a 1000x win multiplier! Three game logos gets you 100x, three rings is 50x and the Celtic symbol 10x, the hat is a 5x, the clover is 2x and finally the pipe 1x.

This is an exciting, polished scratch which you would expect from NextGen. Well designed, it offers a little more in the way of play and wins and is sure to have you longing for a return trip to magical Ireland!

Quick and easy to pick up and play, Irish Eyes 2 is an excellent take on online scratch cards.  Beautifully designed, the smooth game play and playful graphics will attract all kinds of players and the potential for some jackpot wins will undoubtedly see it be added to many favourite lists and prompt plenty return plays.