Another one of those great top slots game from IWG. 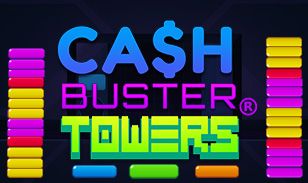 IWG are the masterminds behind Cash Buster Tower, a refreshing take on the best casino slot games online experience, priding themselves as a world leader in supplying online, instant win games! This much-loved classic colour block game offers a twist that will leave your bank balance as colourful and vibrant as the game itself!

Get a free spin if you pay casino by mobile.

Cash Buster Tower will remind you a lot of the game Bejewelled, where the objective is to block colours together to maximise your overall score. The main difference here is that there is money to be won because of your efforts to match the colours, and reduce the size of the tower – the clue is in the name of the game! With 2 lively and energetic bonus games to enjoy along with instant win prizes, Cash Buster Block deserves your time and attention, and in return, you will revel in the rewards and the time that passes from playing! 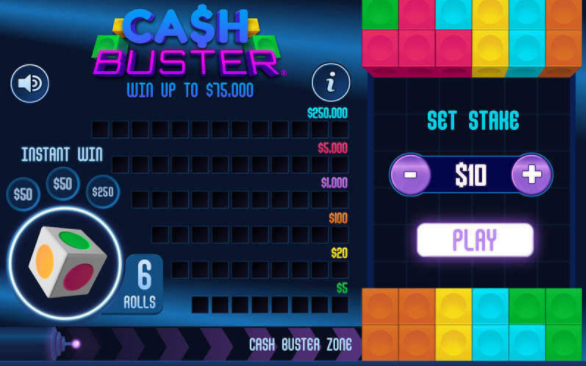 The only resemblance to be had with this casino game compared to other traditional slot games is a spin button, where your colour will be chosen at random, and then you will be given the chance to destroy the corresponding coloured blocks. With each game, your objective is to destroy parts of 6 different towers and you will be given 5 spins in every game for the opportunity to win a pay-out or begin one of the two mini-games. As you abolish part of a tower, you can receive one of the following symbols: a star, an arrow, or a circle, and each of these represent something different. Collecting 4 of the star and/or the arrow will unlock one or both mini-games. Finding 4 of the arrow symbol will launch you to a screen where you will spin a wheel with either of the following prizes up for grabs: extra blocks will be removed in the towers, advancing you further into destroying all the towers or a real cash prize. The star game will take you to a screen where you are asked to pick a card and underneath your chosen one will reveal the same outcome, either more blocks will be destroyed or a real cash reward. The more blocks you destroy in a game, the bigger your overall cash prizes! With the circle symbol, each one collected will fill in part of the circle table to the side of your screen. Unveiling 4 circles will win an instant real cash prize. To give a real-life example, with a max bet of £20, you can expect to receive up to a max sum of 100 if you fill in at least 4 segments of the circle.

From just 50p a game to £20, Speciality Games has thought about every kind of player out there, those who want to enjoy the game more than lose out or those who fancy taking a risk to win it all!

Check out our full new casino games in easyslots.com.

Launch yourself into this vibrant and colourful casino game, a complete twist in the way in which you would expect to win, and with 50p a play, it would be a crime to even call it gambling as there’s such little to lose, so get on this game now!